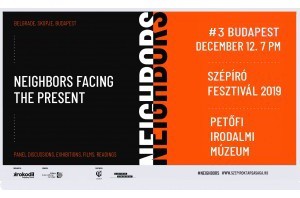 Neighbors facing the present
Panel discussion with photo exhibition and film projection
Thursday December 12th 7PM, Petőfi Literary Museum, 16 Károlyi st., Budapest
Panelists: Igor Coko (Serbia), Iskra Geshoska (Macedonia), László Szűcs (Romania), Pál Száz (Slovakia), Tibor Babiczky, Márton Simon (Hungary)
Moderation: Anna Gács (Hungary)
Photos: Igor Čoko
“Untravel” film by Nikola Majdak and Ana Nedeljković
Rise of right-wing politics changes Europe. In recent years, the resurgence of nationalism across the E.U. has become so powerful that parties from the political mainstream have been forced to tilt sharply to the right as well, often retreating from their core principles of tolerance, openness and diversity. Countries in the formerly communist East have been hit especially hard by factory closures, high unemployment and an exodus of young workers to the wealthier states of Western Europe. By applying politics of fear, conservative “ghosts” along the Danube have been able to capitalize not only on fears of migration but also on angst over economic inequality.
Recent polls show that the conservative, anti-mass migration governing parties of Hungary and Poland are receiving record support as EU unity on immigration continues to crumble. Europe has been at the forefront of the resurgence of patriotic, selfdeterminism in mainland Europe. In January, Croatia joined Austria, Hungary, Poland, the Czech Republic, and Slovakia in rejecting the EU’s migrant quotas and for standing up for a sovereign nation’s right to protect her borders and decide who enters. Closing borders poses an imminent violation of human rights guaranteed by the Geneva Convention and represents serious humanitarian question that touches the core values of the Western civilization itself.
What, if any, is the social or political responsibility of the artist? Or, to put it another way: should writers be writing for a cause? Can artists jointly drive a healthy social change in their local communities? And last but certainly not the least: is present important enough to be faced in the region where facing the past is still the biggest challenge and/or obstacle?
The main aim of the project “NEIGHBORS – Facing the Present” is to engage authors but also other artists and intellectuals in intense debate about the present circumstances in different countries of the region (Hungary, Serbia, Macedonia) in order to influence the development of literary and arts connections, open borders, as well as to empower those that are interested in culture as such, to promote culture of dialogue, reconciliation and reconstruction of the broken links particularly in the region of the Western Balkans in relation with Central Europe and the surrounding EU-countries following the sharp rise of conservativism and the new wave of ethnic and national withdrawal and protectionism motivated by the economic crisis as well as migratory waves from the Middle East via Balkan route (Greece-Macedonia-Serbia-Hungary) towards the more politically and economically stable countries of Western Europe.
Project is supported by the Allianzkulturstiftung and realised under the project CSO activism for regional reconsiliation in the former Yugoslavia – In Support of RECOM, supported by the European Union.
English